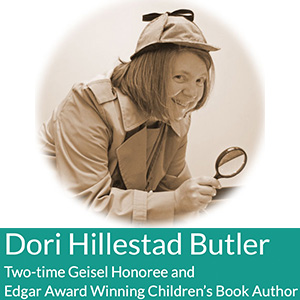 Dori Hillestad Butler is the author of more than 60 books for young readers. Her Buddy Files #1: Case of the Lost Boy won a 2011 Edgar award for Best Juvenile Mystery, books in her King & Kayla series were named Theodor Seuss Geisel Honorees in 2018 and 2019, and Trading Places with Tank Talbott won the Black-Eyed Susan (Maryland) award in 2007. Her books have also appeared on ALSC Notable, Bank Street College Best Book of the Year, Junior Library Guild, CCBC Choice, and Booklist Editor’s Choice lists, as well as more than 20 state award lists.

Dori has also written magazine stories, educational materials, plays, book reviews, character sketches for a mystery game and questions for a trivia game. She’s served as a judge on multiple Edgar award committees and has been an active library volunteer, therapy dog partner and mentor to many young writers. She loves visiting schools and libraries all over the country, either in person or virtually, and is eager to share her love of story with readers and writers of all ages. She grew up in southern Minnesota, spent 19 years in Iowa, and now lives in the Seattle area with her husband and dog.