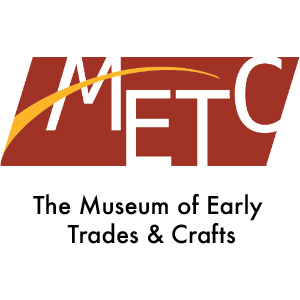 In 1970, Agnes and Edgar Law Land founded the Museum of Early Trades & Crafts  (METC) with the donation of their extensive personal collection of 18th and 19th century artifacts representing the lives of the early immigrants to New Jersey. This core collection has been supplemented over the years, and now consists of over 8,900 objects that include tools, textiles, pottery, and archival materials that tell the stories of the people who lived and worked here nearly 200 years ago.

The Lands raised a large family in Madison, NJ after moving to the area from Long Island.  They both had a keen interest for history and education, which eventually led to the founding of METC.  The Lands primarily collected hand tools and objects that were made with these tools, reflecting the working lives of the people of New Jersey. It was important to both Edgar and Agnes Land that these artifacts have tangible connections to the past, preserving a piece of living history—objects that were used by real people who had productive lives and worked and raised their own families here in NJ.

Although much has changed at METC since the mid 20th century, the collection that was started by the Lands continues to tell the stories of the immigrants and innovators who travelled here from other parts of the world to work the land, raise their families and create communities.  Today, the collection is cared for by professional collections management staff, providing opportunities for research and educational programming.

To inspire a connection to NJ history, culture, trades and crafts.

Sharing the past, imagining the future.

Community : We strive to be an inclusive and collaborative place where all feel welcome.
Innovation: We incorporate creativity and technology in all our exhibits and programs to spark a connection with history.
Integrity: We uphold the highest standards in museum practice.
Education: We create experiences and share stories of the past to help visitors discover our collective history and culture.

View Upcoming Livestreams by the Museum of Early Trades & Crafts

Watch Recordings by the Museum of Early Trades & Crafts