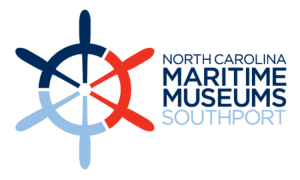 The North Carolina Maritime Museum at Southport stands at the confluence of the Cape Fear River, the Intracoastal Waterway, and the Atlantic Ocean. The museum inhabits the officer’s quarters on the grounds at Fort Johnston. From its humble beginnings in a small shop on Howe Street as the Southport Maritime Museum to becoming a state agency in 1999, the museum has seen many changes and updates. Originally started as a way to draw visitors into Southport, now the museum is a staple of the Cape Fear region. In 2010, through a collaboration with federal, state and city entities, the museum moved to Moore Street and officially reopened to the public on Independence Day.
Voted one of the best attractions in Southport by newcomers and frequent vacationers alike, an afternoon at the museum is a must for any coastal lover who wants to dive into the fascinating history and culture that this region supplies in abundance.

…to collect, preserve, and interpret material culture pertinent to the maritime history of the Lower Cape Fear region.

Watch Recordings by the North Carolina Maritime Museum at Southport