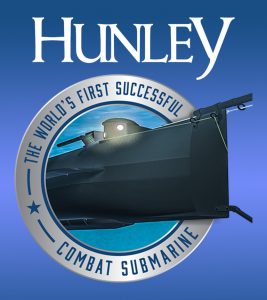 On February 17th, 1864, the H.L. Hunley became the first successful combat submarine in world history with the sinking of the USS Housatonic. After completing her mission, she mysteriously vanished and remained lost at sea for over a century. Over a century later, the National Underwater and Marine Agency found the Hunley. The Hunley Commission and Friends of the Hunley, a non-profit group charged with reaising funds in support of the vessel, lead and efforst with the US Navy and on August 8th, 2000, the Hunley was safely recovered. She was then delivered to the Warren Lasch Conservation Center, a high-tech lab specifically designed to conserve the vessel and unlock the mysteries of her disappearance.

In partnership with Friends of the Hunley, the South Carolina Hunley Commission, Clemson University Restoration Institute, Naval History and Heritage Command, and the Charleston Naval Complex Redevelopment Authority, the mission of The Hunley Project is to conserve the submarine for future generations and piece together clues to solve the mystery of her disappearance.

Watch Recordings by the Hunley Project