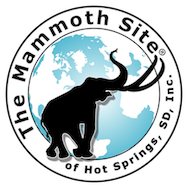 In June 1974, heavy equipment operator George Hanson was leveling ground for a Hot Springs housing development planned by land owner Phil Anderson. Hanson was grading a small hill when his blade struck something that shone white in the sunlight. Hanson got out for a closer look. What he saw was a tusk, about seven feet long, sliced in half length wise, along with other bones. Mr. Anderson contacted three universities and colleges in South Dakota and one university in Nebraska, none of the 4 colleges were interested in the project nor did they have any desire to come and see what was discovered in Hot Springs.

Our mission is the preservation, research, and interpretation of The Mammoth Site of Hot Springs, South Dakota, and development of a broad understanding of the Late Ice Age record across a global framework.

Watch Recordings by the Mammoth Site of Hot Springs, SD